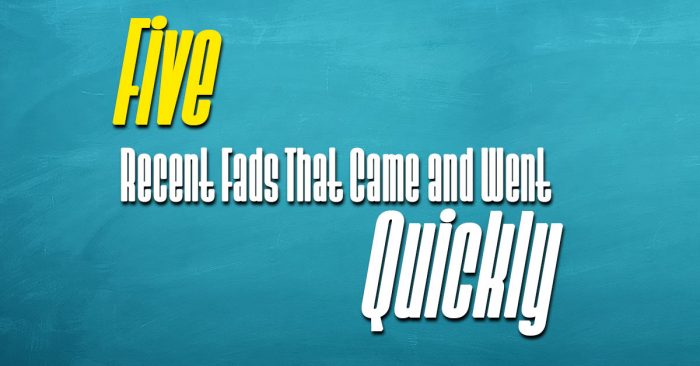 It seems in the past, fads would last perhaps a summer or two. Hula hoops, mood rings and even bell bottoms seemed to have at least some staying power. Today, fads disappear almost as quickly as they catch on. Here are five recent fads that were gone in a blink.

They were a toy, a stress-reliever and they gave those trying to quick smoking something to do with their hands. They were also annoying for many parents and teachers. These hand held gadgets, like most fads, really didn’t do anything. But somehow they caught fire quickly. Kids soon began modifying them into increasing dangerous toys and weapons. For a while in 2017 you would see them everywhere from convenience stores to specialty shops. They manufactured them in wild colors, they lit up and they made noise. Then they quickly went bye-bye, although they are still used in some forms of physical and mental therapy.

Planking became popular in the United States in 2010. It is part dare, exercise and comedic posing. Generally, plankers have their hands at their sides and stiffly pose face down in unusual positions. Of course, the fad wouldn’t exist without cellphone cameras and social media. There are those in fitness who believe planking is a terrific form of isometric exercise.

Wow, for a minute everybody had one of these to provide varying points of views of themselves in a pose. Quick frankly, they were handy in taking wider group shots. They quickly became banned by amusement parks and sports arenas and users became shamed in public. Never has a fad had its moment come and go so quickly.

While guys had their sagging pants, girls tended to move toward using their jeans, in particular the rear end of those jeans and shorts, to send a message. From the cute to the seductive, it seemed everyone had something to say. When a word or two wouldn’t do, designs and “bedazzling” could step in. Pockets, no pockets, it really didn’t matter.

To be fair, Pokemon has been around for years. It was the virtual/digital game, however, that took over the world for a few months. This mobile game was played on smartphones, detecting virtual game characters and pieces on the screen that couldn’t be seen in real life. This led to a variety of accidents and incidents which led to injuries to players who were too focused on the game. It also led to charges of trespassing and unwanted crowds in public areas. At least it got young people outside if not away from their phones.

Fads are a blend of orchestrated marketing, organic happenstance and today, are often the product of social media. It is hard, if not impossible, to predict what’s next.