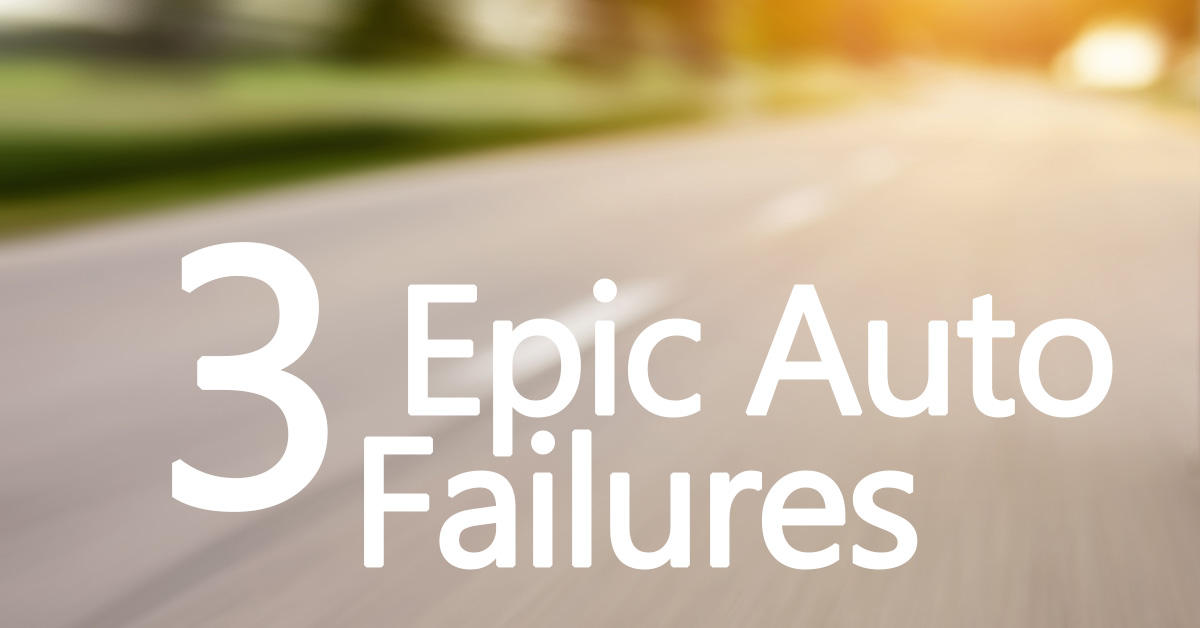 It is relatively easy to identify success stories in auto history. The Model T, the Mustang, the Corvette, Camaro, and others. Yet, there is a strike out for every home run and a fumble for every touchdown. Here are three of the classic missteps in automotive history.

Produced from the 1958 through the 1960 model years, the Ford Edsel was a beast in many ways. It was almost ten feet long and weighed about 4,500 lbs. It had a big, hungry looking front grill with a giant Edsel “E” logo in the center. The station wagon edition was an even bigger abomination. Ford needed to sell about a quarter million to break even, but sold less than 120,000. The automaker lost about $350 million producing the car, which sounds horrific. It is even worse in today’s dollars, translating to about $2.5 billion. Ouch.

American Motors was formed in the mid 1950s as the result of a merger of Nash Kelvinator and Hudson Motor Car Company. It hung around for three decades but always seemed to be a day late and a dollar short with “interesting” models like the “Gremlin”, “Javelin” and the “Pacer”.  The pacer sold more than three times as many Edsel in its five year run from 1979 to 1984 but it wasn’t near enough to save AMC. IThe company went buh-bye in 1988.

Looking back, it’s almost hard to imagine the brand lasted from 1985 to 1992 in the U.S. The idea seemed reasonable. A brand new car Americans could purchase for a couple thousand dollars. It claimed to get great mileage, and while it wasn’t attractive, it was unreliable. Parts could routinely fall off, and leaning against it could create dents. Made in the former Yugoslavia, the car was, quite frankly, a disaster. The last Yugo was produced in Serbia in 2008. It is unknown how many are still drivable in the United States. Some claim none of them were ever suitable for the road.

Like the Yugo, it can be possible to spend too little on your car insurance. It may not meet state minimums, have lower protection levels than you deserve, or have dangerous gaps in coverage. A one-on-one consultation with one of our independent auto insurance agents could help. Not only can they help craft an auto insurance plan for your situation, but they can shop their network of companies to get you a competitive price. Connect with us today to get started on your updated automobile insurance policy.