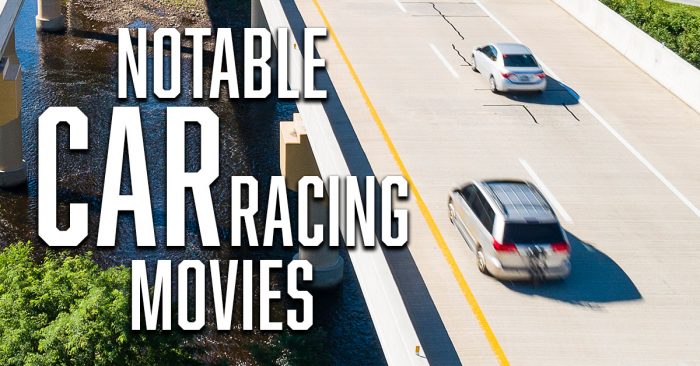 Racing movies range from the thrilling and exciting to the hilarious and poignant. They have featured some of our greatest stars and even cartoon characters. While some are targeted for a very specific audience others appeal to a broad range of movie-goers. Here is a look back at some memorable car racing themed movies.

Racing movies date back to the early days of the automobile. This is the first recorded film about racing, an eight-minute movie starring Fatty Arbuckle.

Another early cinematic effort involving auto racing was also another comedy. This film stars the legendary Charlie Chaplin who plays a racing spectator who keeps getting in the way.

The first “talkie” to involve auto racing was this 1930 drama. That had a minimal impact on both movies and racing.

Tony Curtis plays an engineer in this long-distance racing film about a race from Canada to Mexico.

Before he played the Skipper in Gilligan’s Island, Alan Hale Jr. played a role in this movie about rivals in the Southern 500. Two years later, Hale would act in another racing film called “The Iron Maiden”, a racing comedy.

This was one of the first big budget racing films that starred Tony Curtis and Jack Lemmon in a long-distance race.

This sequel to The Love Bug takes Herbie from the world of demolition derbies to that of auto racing. Herbie would go to LeMans three years later and onto a series of other adventures following that.

NASCAR came to the masses in this blockbuster that starred Tom Cruise. The film is said to be loosely based on Tim Richmond.

Will Ferrell stars as a larger than life NASCAR driver in this 2006 film. The film gave birth to the character of Ricky Bobby.

This animated film started the Cars franchise and gave birth to Lightning McQueen, a race car who learns humility in Radiator Springs.

Racing films have starred legendary actors like James Cagney, Jimmy Stewart, Mickey Rooney, Abbot and Costello and more. They tend to reflect our own interests in cars and racing at the time.

Are you paying too much for automobile insurance? How would you know unless you compare? We can do that for you with one call. Contact us to get a no-obligation quote on your auto insurance. We look forward to assisting you.

A Yard, A White Picket Fence, a Dog and a Pool

What Amount Would You Sue For?

Things Around Your Home Are Multiplying!

The Importance of an Exit Strategy

When is the Best Time to Shop for Auto Insurance?

Things Around Your Home Are Disappearing!